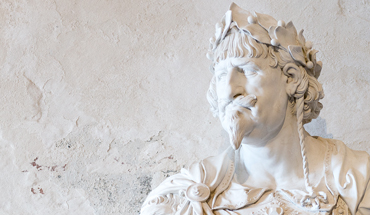 The bust of Christian IV

François Dieussart made the bust of Christian IV in 1643

The bust of Christian IV, the builder king who was king of Denmark for 60 years and who built the Brewhouse, resembles the great man himself. The king is portrayed with his distinctive goatee beard, ponytail and earring. There are marble and bronze busts at Rosenborg Castle.

At the Lapidarium of Kings, you can go right up close to the plaster cast and look straight into the king’s eyes. The 66-year-old king looks like a Roman emperor. He is dressed in imperial robes and has a laurel wreath in his hair. The following year, the king lost the sight of his right eye during the battle of Kolberger Heide. He acquired an eye patch.

The Lapidarium of Kings